I just went through the upgrade process on a Windows 7 machine I use almost every day.  If it didn’t go well I would have a problem….

I purchased the online upgrade from Microsoft.  Amazon had the physical media for $69.99 on pre-order with a $30 rebate credit so I picked that up for another machine later.  Staples had a comparable deal, but I think it has also expired.

The good news is everything works with three exceptions – Microsoft Security Essentials (now embedded in Win8), my Cisco AnyConnect VPN client to get to the office where I work, and a Blackboard Vista website for an online class I help out with.

MSE I don’t need since it is baked in for Win 8, Blackboard Vista stills works fine in Firefox, and I’m not sure what I’ll do about the Cisco AnyConnect VPN for this machine.  For now it’s not urgent and it was rarely used.

You can find notes and details about how to install the upgrade all over the web, but the directions are pretty clear.  I’ll include a couple of screenshots here where  I had a couple of questions. 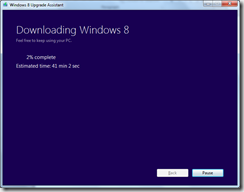 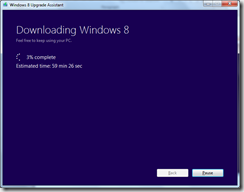 The times estimates weren’t accurate when the process started.  After about 5 minutes they zoned in accurately.

You get three options for install.  I thought about trying the “…creating media” option, but wanted to get this machine back up and running tonight. 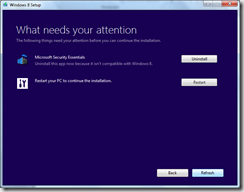 The Upgrade Assistant checked for compatibility of programs a couple of times, early in the process and right before install.  I had to uninstall Microsoft Security Essentials before proceeding and restart my machine.  After restarting, the Upgrade Assistant restarted and asked if I wanted to continue start over.

The neat thing about the Upgrade Assistant is my installed programs moved seamlessly.  I have moved from an old mac to a newer mac in the past and was always impressed by the Migration Assistant in OSX.  It is a great feature that lets you move everything to your new machine.  This was the first time in a Windows upgrade (I’ve been through all of them since Windows 95) migrating was actually the easy part.  This is a great feature, and even migrated my copy of Microsoft Office Home and Business.  Previously the only option was a program like LapLink PCmover or Zinstall.  This was a wow moment to me.

The automatic program transfer only works when upgrading from Windows 7, so you still have a lot of work if you are migrating from Vista or XP.

Other nuggets so far

Overall a very positive experience.  The metro apps are pretty cool, and I still can use my desktop apps to get work done.  Having used a Windows Phone 7 OS daily for the last year, the interface seems familiar, and I can see the advantages of a similar interface for my phone, my tablet (someday), and my laptop.  Although if I can spring for it, maybe my next laptop will be my tablet also… when the Surface Pro comes out.

If you click the product links and buy something, the site admin may get an Amazon Affiliate commission 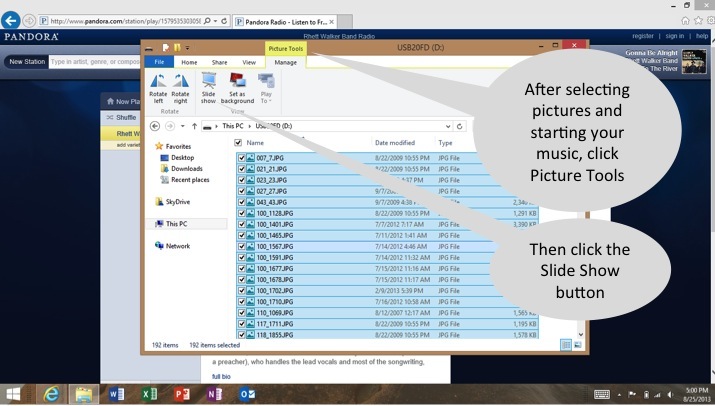 Why all the hand wringing about the Surface RT not running the same apps as Windows 8 desktop?  Tech blogs all over […]

I keep checking the search engines for the Windows Phone 8 release date for AT&T, and when I’m looking for date specific […]